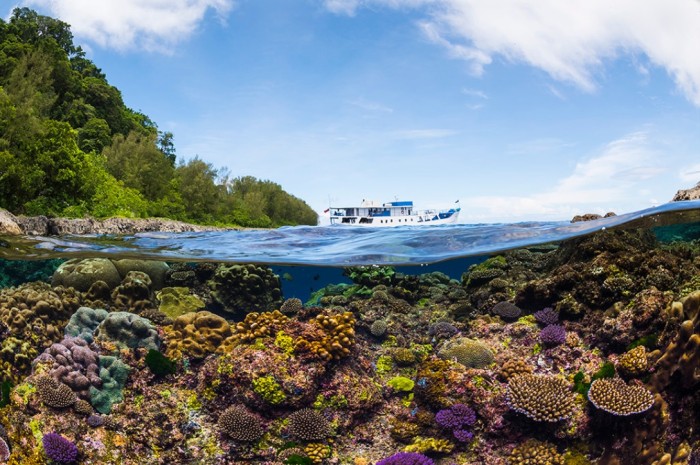 KR: When Europeans think about Australia and its nature, the unique GBR comes to mind first. What makes the GBR so special?

LK: Anyone who has ever dived or watched diving films will understand the uniqueness and magic of each reef. But one of the interesting things about the GBR is that it is not just one reef. It’s a collection of some 3,000 individual reefs spanning ~2,300 km. It’s unique because…

KR: Unfortunately we are reading increasingly about threats to the natural heritage – what are the threats in general and in particular?

LK: It’s the world’s most sophisticatedly managed Marine Park (UNESCO’s title) but life still throws dangers at it like cyclones, over-predation by species such as the crown of thorns sea stars and then of course there’s climate change. Two reasons why climate change has scientists pulling their hair out for the reef. Firstly, when corals experience temperatures above their threshold, you get a bleaching event – and there’s one going on now. When temperature-stressed, coral polyps release their symbiotic algae buddies. Without zooxanthellae algae, coral is merely a naked white skeleton, unable to breathe or eat. Secondly ocean acidification- try blowing bubbles (CO2) into a glass of water- see how quickly pH goes down. Low pH means coral can no longer build calcium carbonate skeletons, neither can plankton if they’re not there, fish, whales etc have no food source and this all has huge ramifications for the rest of the food web. Acid oceans cause dead zones where life can not exist. Think about how important the ocean is as a carbon sink, for fish that we eat and for our climate in general.

But let’s explore the proposed Adani Carmichael coal mine, rail and port expansion project at Gladstone Harbour (see map). This proposal is controversial with a capital C- worth of a John Grisham novel, and it has been heavily delayed due to both financial and environmental concerns. It aims to produce up to 60 million tonnes of coal per annum. In do this, they need to dredge the reef, displacing an estimated 1-3 million cubic metres per year. This proposal just got environmental approval (Oct 2015) by our Environment Minister Greg Hunt with some extra (140) conditions i.e. now, rather than storing the spoil within the reef itself, it must be stored on land and greater than 50 m from any water course. The project has met with great opposition. I’ll just put the environmental threats aside for a moment, but there is great concern that the project is wholly unbankable. If you are interested in learning more about the project, I urge you to look at the history of the company, the current price of coal and the investment that the Queensland government is required to outlay in order to build new infrastructure for the project.

KR: What does the coal mine, port extension and rail project mean for the Region, for Australia and maybe the World?

LK: The Carmichael mine, if it goes ahead, will be one of the biggest black coal mines in the world, spanning some 200 km2 – bigger than most capital cities – and within a world-heritage listed area. It’s been likened to putting the worlds biggest mine at the Grand Canyon. At peak, it’s output would be 60 million tonnes of Carbon per annum – 130 million tonnes of CO2 per annum. This is Austria and Qatar’s combined output per annum.

According to Adani’s development proposal, the mine will provide “enough coal to generate electricity for up to 100 million people”. Mmm, for India currently, the cost of imported coal must be above Rupees 6.0/kWh to make a profit. This is when the current cost of solar is Rupees 4.70/kWh. India’s going through a stellar rise in investment in renewables which has risen 80 % since 2015 (to $5.6 billion). Coal is looking like less and less of a viable option.

I don’t want to be glib about depriving potentially 1 million people in India the chance to a better life, so to examine the argument fully, I urge you to read India’s ex-Minister of Power’s detailed article. Simply put, due to the cost prohibitive infrastruction costs of coal-based power and to reach India’s mostly rural population, that power will not reach India’s poorest- but rather be added to the existing grid.

In terms of Australia’s needs, the project (according to Adani) proposes to create 4,000 jobs during the operations phase and generate some $4 billion to the local economy in royalties. Contrast this to 70,000 jobs from tourism in the GBR. A report by ACIL Allen Consulting however, has put the figure far closer to 400 jobs. It is also worth mentioning here that some 11 international banks have stepped away the project deeming it ‘unbankable’.

KR: Advocates for more coal mining in Australia warn that India and other foreign buyers will turn to Indonesia and South Africa if coal resources aren’t exploited, eliminating economic benefits to Australia and doing nothing to cut emissions. How would you evaluate that point of view in a (moral) global context?

According to the former minister, the country wants to control its own power production rather than relying on importing coal for lesser and lesser profit margins, for its security, for its infrastracture needs and for human health and more equitable access.

But if we still feel a burning, irrational need to exploit coal resources, then let’s turn to Obama’s call, “Climate change is the moral issue of our time”. I think the major point that a climate scientist would jump up and down to try to explain is this: Look, emissions are not annual. Emissions are cumulative. Whether a project lasts 2 years or 60 does not matter – not when we look at eventual peak warming. CO2 accumulates in the atmosphere and takes an extremely long time to remove. So when we talk about simply off-setting a current emission – phew, don’t get me started on the biophysical nonsense of off-setting. The only way that off-setting is viable is not from the old traditional tree planting model but when projects fund a reinvestment in renewable energies. Mmm, offsetting a carbon mine with renewables… I think that’s sad-funny. Globally, we have a moral imperative not to build this new infrastructure.

KR: As far as I can see the “coal deal” is already signed. Is there any opportunity to do take action once this deal has been signed?

LK: Yes, phew yes! Adani needs three things to go ahead. Adani’s Carmichael mine project has been given environmental approval – subject to the 140 conditions (Environment Protection and Biodiversity Conservation Act 1999) and it’s got environmental authority (Environmental Protection Act 1994); but it still must obtain a mining licence from the Queensland state government and to do that, it must prove this project financically viable. With coal prices languishing to their lowest level since 2006 (as at Feb 2016), ageing power plants closing en masse, and countries committing to cut emissions, the financial viability of the project has been cast in doubt.

The consequences of this mine are so vast that there exist multiple court cases against Adani which are ongoing. One case has been brought by the traditional, indigenous owners (The Wangan and Jagalingou Traditional Owners‘ Council), citing irreparable destruction to ancestral lands while the Environmental Defenders Office have been working tirelessly to ensure the environment is protected in this sensitive area.

You mention taking action, in October 2015 the Australian government put forward a plan to take away a part of Australia’s Environment Protection and Biodiversity Conservation Act (1999). They wanted to stop environmental groups posing legal challenges to development approvals. Tony Abott, former Australian Prime Minister said, “New projects and expansions must be treated on their merits, not held up by vexatious and incessant legal appeals lodged by a small band of extreme environmental groups.” Mmmh think that law couldn’t be passed? Just a short time ago, Western Australia passed anti-protest laws meaning it is illegal to protest legal projects (such as the approved Carmichael Coal Mine).

I mean, what a fascinating case this is. Worthy of any John Grisham legal novel with twists and plot turns. What’s at stake though is the health of our GBR both directly through the development of a mine and from dredging spoils via port expansion and indirectly through the risk of potential oil spills and a whole lot more climate change via future CO2 emissions.

It’s really not too late though – this is far from over. And if you’re moved to take action – I encourage you to sign a petition or donate to help those fighting Adani in court right now.

KR: On behalf of dieUmweltDruckerei and myself, I would like to thank you very much for the exciting and wonderfully interesting interview!